William Brantley Aycock, a native of Lucama and Selma, North Carolina, served as the fifteenth president of NC State’s Student Government. Born into a prominent North Carolina family, William Aycock was the cousin of former North Carolina Governor Charles Brantley Aycock. While serving as president, William Aycock took a tough stance against hazing, cheating, and theft. During Aycock's presidency, Works Progress Administration provided funds and labor for campus buildings; NC State received a $37,000 grant from the WPA to complete the Memorial Tower. The WPA also provided labor for the construction of a field house at Riddick Stadium. In addition to his participation in Student Government, Aycock was also a member of the Blue Key honor society and the Inter-Fraternity Council. Aycock graduated from NC State in 1936 with a degree in education.

Following graduation, Aycock attended the University of North Carolina at Chapel Hill. In April 1937, Aycock was elected president of the Southern Federation of College Students at a meeting in New Orleans; the same year, Aycock graduated from UNC with a master’s degree in history. After teaching high school history for two years, Aycock enrolled in the UNC School of Law, however, his academic career was interrupted by military service during World War II. A decorated veteran, Aycock received a Bronze Star, Silver Star, and the Legion of Merit for "action in the European Theater of Operations as battalion commander in the 87th Infantry Division." In 1948, Aycock received a law degree from the UNC School of Law. 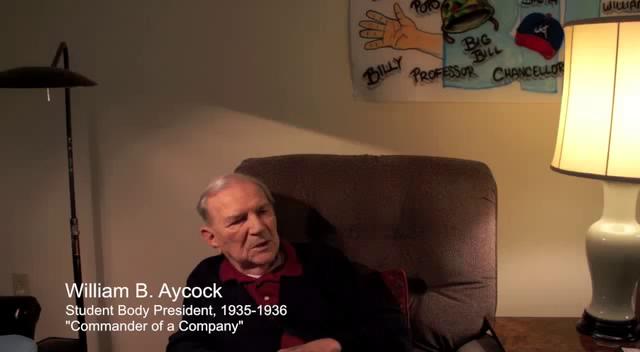 Commander of a Company
Lucama and Selma
Working at the Bookstore

Under President Aycock’s leadership, the Student Council issued strict warnings against hazing, cheating and theft. According to the Council, students convicted of hazing, stealing, or found in possession of stolen goods "shall be immediately dismissed from college."

Student Council publicly supported Consolidated University President Frank Graham’s proposal, known as the Graham Plan, which called for the elimination of student athletic scholarships. Graham opposed student athletes receiving any benefits unavailable to normal students. Aycock announced his support for the Graham Plan stating, “each of the proposals is directly concerned with the improvement and establishment of the proper part that inter-collegiate athletics occupies in our student life. For those reasons I am wholeheartedly in favor of the Graham Plan.”

During Aycock's tenure, the Student Government renamed the Court of Appeals the "Board of Reviews." The review board was reorganized with the Student Body President acting as a non-voting member of the Board.

William Aycock began teaching law at the University of North Carolina at Chapel Hill in 1948. Nine years later, the UNC at Chapel Hill Board of Trustees named Aycock chancellor, a position he held until 1964. Following his tenure as chancellor, Aycock resumed his teaching position. Aycock retired from UNC in 1985.