Wesley A. McClure grew up in Clemson, South Carolina, and in 1964 he enrolled in North Carolina State University's School of Design. He participated in many university activities including study abroad. During the summer of 1968, he worked under an architect in Yorkshire, England, where he aided in the design of a commercial and residential center. While abroad, McClure visited British universities and met with local student government leaders. In honor of his academic success, the Blue Key National Honorary Fraternity awarded Wes McClure the Most Outstanding Senior plaque in April 1968. He was a member of Student Government during he entire time at NC State, first as a senator, then as student body treasurer, and finally as student body president. McClure graduated from NC State in 1969 with a degree in architecture. 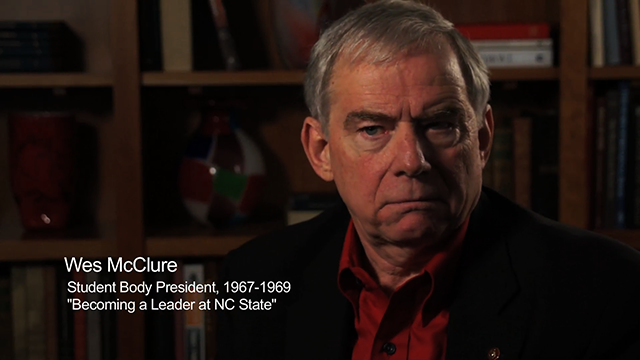 Wes McClure became a freshman senator in NC State's student legislature in in 1964. He continued as a senator during his sophomore year, and then he was elected student body treasurer, a position in which he helped reorganize the student government budget and allocations to student organizations. In 1967 he was elected to his first term as student body president. He was a member of the University Party.

Throughout his first term, McClure and the student legislature dedicated effort to improving the Student Government constitution, but the student body defeated the proposed constitutional changes in 1968. McClure was not discouraged, and he ran for a second presidential term with the new constitution prominent in his platform. During that election campaign, McClure spoke of the value of continuity in the office, especially in light of the changes Student Government was facing.

After graduation, Wes McClure served in the U.S. Navy. He then became an architect, and he resettled in Raleigh in the 1974. During his career he was a principal in two architectural practices, the last being McClure Hopkins Architects, and he retired from the profession in 2014. He is a Fellow of the American Institute of Architects. In 2014 he and his wife Susan founded Savvy Parrot, Inc., the developer of “Adventures on Pepi’s Island," a web-based social emotional learning software.