T. Greg Doucette began his academic career at NC State in 1998 as a freshman. While attending an information fair during the first few weeks of school, Student Body President Jenny Chang encouraged him to become involved in Student Government. This encounter would prove to shape Doucette into one of the most established student leaders at NC State. Doucette began his work with Student Government as a freshman student senator, unsuccessfully campaigning in 1999 for Student Senate president. Doucette took time off from school following his sophomore year, reentering university life in August 2005. In 2007, Doucette campaigned for president of the Student Senate in protest of the Elections Commission’s removal of James Hankins from the ballot. Doucette won the presidential election with almost 61 percent of student votes. Following a successful term focused on reducing textbook prices and the implementation of a student fee referendum, Doucette ran uncontested for reelection. During his senior year, Doucette held leadership positions as both NCSU Student Senate president and president of the UNC Association of Student Governments.

Greg Doucette graduated from NC State in 2009 with a Bachelor of Science degree in computer science. 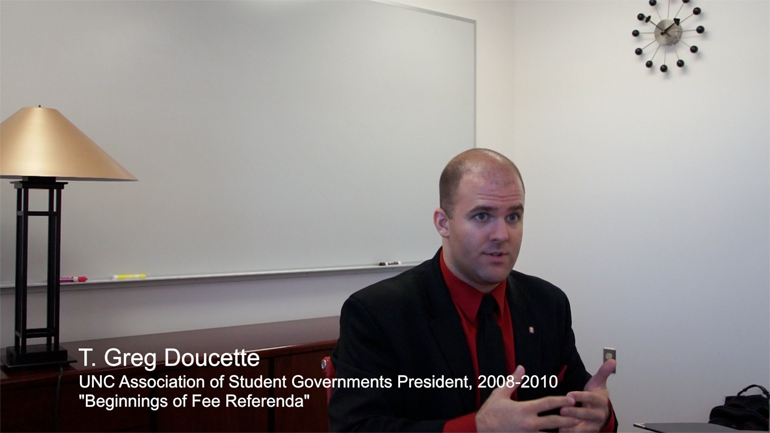 While serving as a lifetime education senator, Doucette simultaneously held a position as technical administrator for student elections. During the 2006 freshman Senate elections, however, Doucette accidentally left a candidate’s name off the ballot. Technician declared the election was “clearly ruined” and Doucette resigned from the position. Technician later applauded Doucette for taking responsibility for the incident and for filing an elections appeal.

Senator Doucette sponsored and authored several bills while in office. In 2006 he sponsored a bill to support the establishment of a Lesbian, Gay, Transgender, and Bisexual Center on campus and wrote the Student Media Independence Referendum. The referendum proposed the removal of the Student Media Authority from the student body constitution, rendering Student Government powerless over Student Media. Doucette also proposed a bill clarifying that the decisions the Elections Commission made to remove James Hankins from the Student Senate president ballot were not under its authority.

While campaigning for Senate president, Technician endorsed Greg stating, “Doucette is the obvious choice. He has a clear understanding of how the Senate works, a background in professional lobbying and is more than willing to stand up to and circumvent the administration when needed.”

Doucette’s most celebrated accomplishment as Senate president was his creation of a Student Fee Referendum. The referendum was the first of its kind; it allowed students to vote on proposed fee increases. Approximately 3.4 percent of the student body voted on the first referendum.

Doucette organized a sit-in at a UNC Board of Governors meeting to show support for Chancellor Oblinger’s proposed 2.7 percent tuition increase. The BOG permitted the Chancellor to request up to a 6.5 percent increase. Doucette also advocated for lower textbook prices and supported voter registration drives.

Doucette ran uncontested for a second term as Senate president. According to Technician, four out of five top positions within Student Government were uncontested during the 2008 election. Technician stated the uncontested positions furthered “sentiments that this group is an exclusive club that is controlled by an elite few.”

In April 2008, student leaders elected Doucette president of the UNC Association of Student Governments. Although he considered resigning from his Student Senate presidential position, Doucette ultimately maintained both titles. Although students questioned his ability to fulfill both positions, Doucette said the UNCASG position only furthered his opportunities as Senate president.

As UNCASG president, Doucette reorganized the association to look more like NC State’s Student Government, including changing its constitution and reducing the president’s stipend.