Terry Carroll, a Winston-Salem, North Carolina native, served as the fifty-fourth president of Student Government. Following graduation from high school in 1966, Carroll entered NC State as an aerospace engineering student. Prior to his junior year, Terry Carroll took a three-year break from State before returning to campus and serving as the president of Student Government. According to Carroll, he spent two years of his break in the military "and the other [year] was spent doing some of the things I’d always wanted to do." While campaigning for the presidency, Carroll appeared on the first televised panel discussion of campus election issues. He was active in many campus organizations including the Union Dance Committee, the Student Senate, and the wrestling team. Additionally, Carroll was elected chairman of the Union of North Carolina Student Body Presidents. The Union's goal was to distribute information about campus programs and problems.

Carroll graduated from NC State in 1974 with a degree in science education. 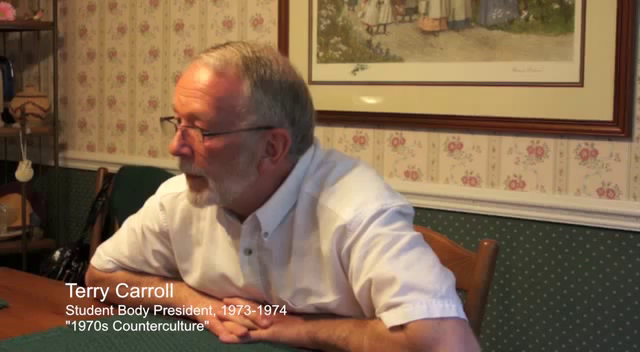 Carroll presented a four-point request to Chancellor Caldwell that received a lot of attention from administrators and students. His points focused on lowering the price of textbooks and campus parking decals, the creation of a black cultural center, and ensuring student privacy. In response, Banks Talley, dean of Student Affairs, allowed students to use the first floor of the print shop as a cultural center. The Chancellor denied requests for discounted parking decals.

Carroll created a calculator rental program that allowed students to rent a calculator through the Student Services Commission for $1/day. The program benefited students who could not afford to purchase calculators. Profits from the sales supported additional student programs.

Terry Carroll currently serves as the CEO of SunCatcher Design Group, LLC, a company which seeks to reduce energy consumption in residential and commercial buildings. Carroll is also a "semi-retired faculty member of the Sustainable Development program and the Biology Department" at Appalachian State University. Carroll began teaching at Appalachian State in 1983; he has taught many courses including physics, sustainable development, and environmental studies. Throughout his career, Carroll has received 11 grants and presented or authored 12 papers.