In spring 2012, Robert Andrew “Andy” Walsh was voted by NC State students to become their ninety-fourth student body president. Prior to his election to the presidency, he served in the Student Senate, where he authored a bill to acquire a live mascot.

Walsh campaigned for the presidency with a platform focused on communication between Student Government and NC State students, and he was instrumental in creating some well-known student engagement projects including the Traditions Keeper program, Campout, the Wolfstock concert series and Packapalooza.

Walsh graduated from NC State in 2013 with a Bachelor of Arts in political science. 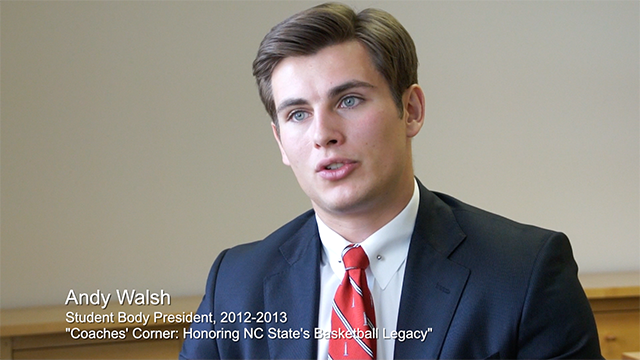 While on the Traditions Committee as a student senator, Walsh successfully lobbied for the acquisition of NC State’s live mascot, a Tamaskan dog named Tuffy. Walsh was also part of the team to establish the Traditions Keeper memento program, and he helped establish the Coaches’ Corner statuary project. As Student Body President, Walsh advocated for more student engagement, and he helped found both the Wolfstock Concert Series and the Packapalooza concert event held at the end of NC State Welcome Week. Walsh is also well known for his part in “Roll Pack.” After NC State beat No. 1 Duke in 2013, Walsh assisted friend Will Privette in rushing the court. Though Privette was knocked from his wheelchair in the excitement, he was unharmed, and a “Roll Pack” t-shirt campaign resulted, raising over $3,300 for an NC State disability support organization.

After graduating from NC State, Andy Walsh worked as Legislative Intern in Government Affairs at SAS. Also, he was a Legislative Assistant in the Office of Federal Affairs at NC State.