Mike Giancola has served as a mentor to NC State student leaders since 1998 when he began his position as Residence Life Coordinator with University Housing. Three years later, Giancola was appointed as the director of the Center for Student Leadership, Ethics & Public Services (CSLEPS), a position he still maintains. As the director of CSLEPS,

Giancola oversees various community service projects throughout the semester, including Service NC State and Alternative Spring Break. These projects often partner with non-profit organizations such as the American Red Cross, Habitat for Humanity, and Stop Hunger Now. In his position, Giancola has worked to encourage student participation in local and international service projects and served as a mentor to numerous student leaders, often telling students his job is to infect them "with some realities of the world.” 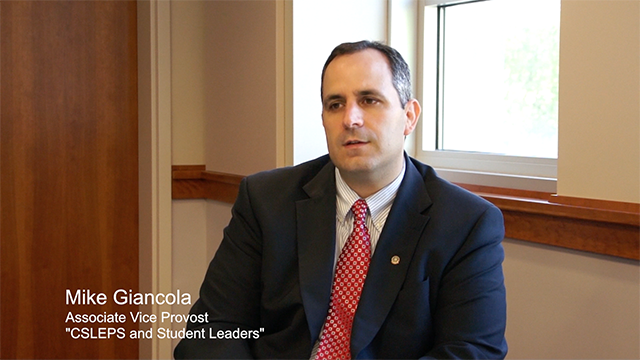 Mike Giancola received a Master of Science degree in psychology from John Carroll University and a Master of Higher Education from Kent State University in 1993 and 1995, respectively. In October 2009, the Raleigh News and Observer named Giancola "Tar Heel of the Week" for his work with projects such as the University Million Meal Event, in which students and volunteers raised $16,000 and packaged more than 1,031,000 dehydrated meals in an effort to reduce world hunger. In March 2012, Giancola began service as associate vice provost at NC State.