Brigadier General Leodis T. Jennings was born in Detroit, Michigan, and he grew up in High Point, North Carolina. While a student at NC State in the 1970s and 1980s, he was active in Greek life, serving as the president of the Alpha Phi Alpha chapter and also president of Greeks United, an African American panhellenic organization on campus. He also served in R.O.T.C. He received a Bachelor of Science in Materials Engineering in 1983. At graduation from NC State Jennings was commissioned an Armor officer in the U. S. Army National Guard. 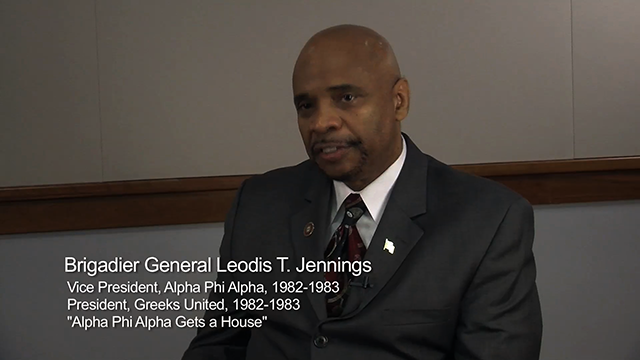 Jennings went on to receive a Master of Arts in International Business from Webster University (1984), a Master of Military Art and Science from Fort Leavenworth, Kansas (1996), and a Master of Science in Strategic Studies from the Army War College at Carlisle Barracks, Pennsylvania (2002). He has had a long and distinguished career with the U. S. Army, becoming a Brigadier General. As of 2015 he serves as a Special Assistant to the Army Deputy Chief of Staff for Programs, G-8, Headquarters Department of the Army. Among his duties is ensuring a balanced resourcing and equipping strategy across all three components in the Army while adjudicating flag-level overseas contingency operations issues involving deployed and/ or deploying forces. In 2012 he was appointed to the NC State Board of Visitors in a term that lasts until 2016.