In spring 2010, NC State students voted Kelly Hook their ninety-second student body president. Hook, the sixth woman to hold the position, won the election by more than one-thousand votes. Prior to her election to the presidency, Hook served two years in the Student Senate and one year as the chief of staff in Jim Ceresnak's presidential cabinet.

Hook campaigned for the presidency with a platform that focused on simplifying students' lives through the reorganization of Wolf Line maps and reducing the "unnecessary burdens" of online courses. Hook declared she would "hold our administration accountable and make sure the needs of students are the top priority." In addition to maintaining elected positions within Student Government, Hook was involved in "Howl for Haiti," a program designed to raise money for victims of the 2010 Haiti earthquake.

Kelly Hook graduated from NC State in 2011 with a Bachelor of Arts in political science. 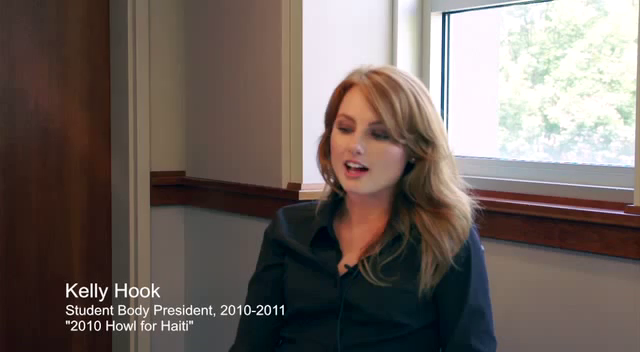 Hook traveled to Russia along with fifteen other U.S. student government leaders over spring break to "gain a better understanding of Russia’s development path and an insight into the decision-making logic of Russian leaders." She described her experiences abroad in her university blog, Off the Hook, which she maintained throughout the year, documenting her experiences working in Student Government.

During her presidency, Hook implemented several programs including the "Distinguished Professor Lecture Series," which honored three "student favorite" professors and invited them to speak on campus and "The College Cup" event, a fun athletic competition between NC State colleges. Hook also traveled to Washington, D.C. to discuss the importance of Pell Grants with North Carolina legislators.

After graduating from NC State, Kelly Hook worked as the marketing coordinator at the Carolina Ballet. In 2013 her career has taken her to San Francisco.