Jay Dawkins served as the ninetieth president of NC State’s Student Government. While campaigning for the presidency as a junior, Dawkins called for altering student athletic ticket distribution, student fee transparency, and reformation of the student code of conduct. Dawkins also supported the "Finish the [Bell]Tower" campaign.

During his presidential tenure, Dawkins worked alongside other Student Government leaders, Campus Police, the Athletic Director, and the Vice Chancellor of Student Affairs to implement changes to football ticket distribution. Changes to the ticketing system included the introduction of a stand-by line, an extended "on-demand" claim period, and a new priority point system. Dawkins believed the changes would positively impact "the environment of our stadium on game days."

Following his term as student body president, Dawkins was elected president of the 2010 senior class. He graduated in May 2010 with a degree in civil engineering. 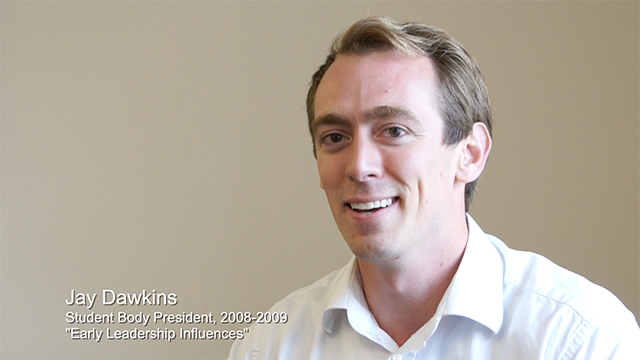 Senator Hilary Clinton visited NC State's Centennial Campus and the McKimmon Center on May 6, 2008 where Governor Make Easley announced his endorsement of Clinton for president. During her visit, Clinton spoke of North Carolina stating, "North Carolina has made all the right bets and all the right investments. You are looking toward the future with confidence and optimism." Student Body President Jay Dawkins assisted in providing Sen. Clinton with a tour of campus.