John David "J. D." Hayworth described the student body president as a lobbyist, catalyst, a student, and an ambassador. Hayworth fulfilled each of these roles during his term as president. While attending State on a football scholarship, Hayworth became involved in many campus organizations. He was WKNC's sports director and he contributed to the athletic section of the 1979 Agromeck. 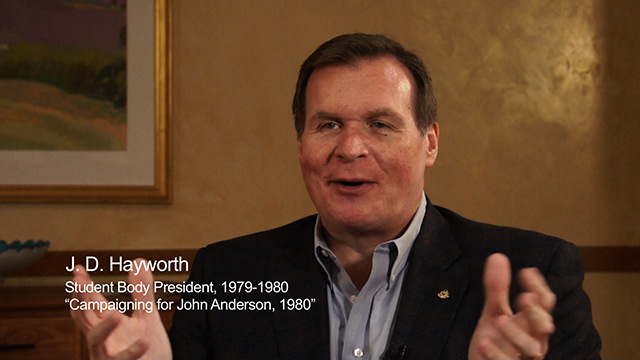 Hayworth lobbied the administration for more student space in the Court of North Carolina. After meeting with Student Government officers, University officials moved the fence surrounding the Court thirty-five yards inward. Construction workers used the fence to protect the area surrounding the construction of the Tompkins-Winston Hall link. The move allowed students more area in the Court to lounge and enjoy the sun. Hayworth said from that point onward, administrators would contact Student Government during the planning and contracting stages of building.

Hayworth pushed for the Classroom Consumer Report, a new form of faculty evaluations. The report consisted of fifteen questions about instructors, lectures, and homework. Other issues that involved Hayworth as student body president were the effect of the Iran hostage crisis on Iranian students at NC State and the impact on the university of negotiations between the UNC System and the U.S. Department of Health, Education, and Welfare regarding desegregation.

J. D. Hayworth has had a long career in broadcasting, working in South Carolina, Ohio, and Arizona. He is currently host of "Newsmax Prime" on Newsmax TV. Hayworth’s previous achievements include serving as a Republican member of the U.S. House of Representatives from 1995 to 2007, when he represented Arizona’s Fifth Congressional District. In 2010, he staged an unsuccessful Republican primary campaign against U.S. Senator John McCain of Arizona.

Hayworth and his wife, Mary, have three children.