Bob Cooke served as vice president and president of Student Government at NC State. His presidential campaign platform focused on an improved faculty advisory system, reduced restrictions on student parking, lowering rental rates of Reynolds Coliseum, and an improved relationship between Student Government and the Chancellor. Cooke was active in numerous campus organizations such as Alpha Zeta, the College Union, and the Rules Committee. Serving as the chairman of the Rules Committee, Cooke revised the by-laws and standard operating procedures of the legislature. As president of the student body, Cooke strove to strengthen the relationship between students and the administration. Cooke received his bachelor's and master's degrees in biological and agricultural engineering in 1961 and 1965, respectively. Cooke also received a doctoral degree from NC State. 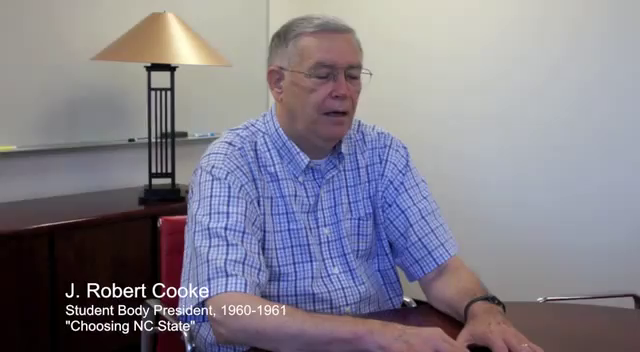 During his term as president, Cooke addressed the NC State College Board of Trustees and expressed the concerns of NC State students and Student Government. Cooke stressed the importance of a more effective faculty advisory system, a more elaborate library collection, and the need for women’s on-campus housing. Cooke aided in the creation of Student Government’s Committee on Human Relations which met with faculty representatives to discuss campus problems. Additionally, Cooke and the Student Senate opposed a policy created by the College’s business office that changed the method in which the office billed students for courses. Recognizing the student body’s concern for the new method, the business office repealed the fee payment plan. In response to State College students’ embrace of President Kennedy’s newly established Peace Corps, the Student Senate, with Cooke’s support, passed a resolution that encouraged the college to invite the federal government to use NC State as a training school for the Peace Corps.

In 1966 Cooke accepted a teaching position at Cornell University. While teaching at Cornell, Cooke aided in the establishment of the Riley-Robb Hall Computing Center, a Macintosh and PC computer lab and graphic design center. James Cooke has been a member of the American Society of Agricultural and Biological Engineers since 1989 and has been honored with many awards including EDUCOM's Best Engineering Software Award (1989) and the American Society for Engineering Education Excellence in Teaching Materials Award (1991). From 1998-2003 Cooke served as the Dean of the Cornell University Faculty.

Cooke is currently an emeritus professor at Cornell. His teaching and research interests include the biomechanics of plants, educational software, and scholarly publishing strategies.