James Baxter Hunt, Jr. was the second non-senior to serve as student body president and the second president to serve two terms. Originally elected vice-president in spring 1957, Hunt assumed the presidential position when Fred Houtz, Student Government president-elect, failed to meet academic requirements to return to State in the fall. Hunt adopted many of Houtz’s presidential goals, which included promoting "good will" between Raleigh’s media and NC State and ensuring all students had the opportunity to park their cars on campus. During his first term, students and faculty recognized his leadership skills and academic success; Hunt was inducted to the Blue Key and Golden Chain honor societies in spring 1958. In addition to serving as student body president during his junior year, Hunt served as the editor of The Agriculturist, the agriculture club’s student publication.

In 1958, Hunt won his campaign for reelection by more than 1,000 votes. Following his election, Hunt release a statement saying, "I again pledge to you my full effort and ability in representing you with the faculty, administration, and other groups . . . I plan to present my ideas as your elected president to the legislature and to constantly work with the body to get bills and resolutions passed in your best interest." During his second term, Hunt successfully lobbied for greater student representation on the Campus Union's Board of Directors. In response to the reorganization of the Board of Directors, Hunt stated, "It is important to point out that under the new provisions the student body representatives . . . will have a majority vote on the board." The same year, Hunt was elected vice-president of the Young Democrats Club at the North Carolina Convention of the Young Democrats Club in Greensboro, NC.

In his "Review of Student Government Activities, 1958-1959," Hunt noted the success of his "Small Group Plan of Freshman Orientation," increased student participation in the United Fund Drive, and the more democratic student representation on the College Union’s BOD. Hunt also called for the establishment of a presidential veto for Student Government and demanded major changes in the campus honor system. In 1959, the Blue Key declared Hunt the "Outstanding Senior" at the annual Junior-Senior Ring Dance. James Hunt Jr. graduated from NC State College in 1959 with a Bachelor of Science degree in agricultural education and in 1962 with a Master’s degree in agricultural economics. Hunt received his law degree from the University of North Carolina at Chapel Hill in 1964. 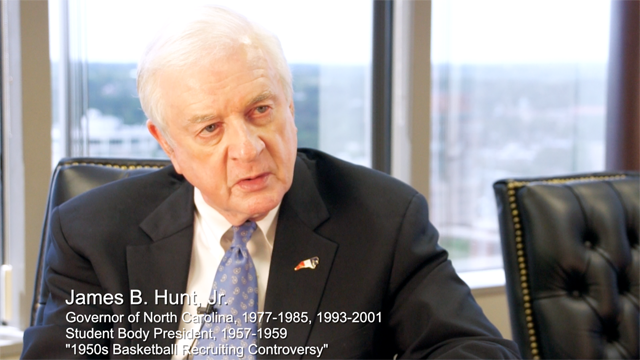 During his first presidential term, Hunt demonstrated his leadership skills. He addressed over 2,000 students at the NC State College annual High School Day, he encouraged students to display maturity and responsibility at basketball games, and he called for the addition of permanent sidewalks. Hunt also encouraged students to donate $1 to the World University Fund Drive. While calling for student donations to the WUFD Hunt stated, “ . . . With your contribution you can drive a nail in the bridge of understanding to world peace.” Hunt also successfully lobbied for the addition of a stop light at the intersection of Dunn Avenue and Pullen Road.

One of Hunt’s greatest accomplishments was the implementation of small groups at freshmen orientation. At the end of his first term, Hunt called for student volunteers to serve as orientation group leaders. The small groups facilitated more personal interaction with students. Hunt’s small group orientation was the first of its kind at State. Following the five-day orientation, students and administrators commented on its success.

Students continued to oppose the "modern" font on the new diplomas. In October 1959, Hunt addressed students' complaints in an open letter in Technician. In the letter, he clarified the activities of the diploma committee and explained the process and compromises undertaken in the design of the new diploma.

In response to student complaints concerning a $15 student fee for the College Union, Hunt encouraged students to attend College Union hearings or to “quit griping about your $15.” He stated, “Student Government is now giving you an opportunity to do something about it.”

In 1976, James Baxter Hunt, Jr. was elected to his first term as governor of North Carolina, making him the fourth NC State alumnus to hold that office. While celebrating his campaign victory at the Raleigh Holiday Inn, Hunt declared, "I remember when I use to catch hell from the editor of the Technician. I knew if I stood that, I could stand anything." Upon reelection in 1980, Hunt became the first North Carolina governor to serve two four-year terms. During his second term, Hunt ran an unsuccessful campaign for the U.S. Senate. Following his defeat in 1984, Hunt stated, "Yes, my friends, our long and difficult battle is over, but we are not beaten in spirit. I am beaten, but I am unbowed. I may be disappointed, but I will not be bitter. We have fought for what we believe, and we have carried the torch forward and that flame will never, never die." In 1985, Governor Hunt took a break from politics until he returned in 1992 to serve an additional two terms as governor, making Hunt the longest serving governor in North Carolina history.

As governor, Hunt established many education programs including Smart Start and the North Carolina School of Science and Mathematics. Hunt also re-appropriated approximately 380 acres of land from the Dorothea Dix Hospital to NC State University; the land now hosts NC State’s Centennial Campus. Hunt’s other accomplishments include the establishment of the NC Biotechnology Center and the Microelectronics Center of North Carolina.

In 2006, the Editorial Projects in Education Research Center named Hunt one of the ten most influential people in American education, along with Bill Gates and former Presidents Bill Clinton and George W. Bush. A year later, Hunt was inducted into the North Carolina Business Hall of Fame. Hunt's other awards include the National 4-H’s Outstanding Alumnus Award, the Columbia University Teachers College Medal for Distinguished Service, the American Academy of Pediatrics Child Health Advocate Award, and the Harold W. McGraw, Jr. Prize in Education, among many others.

Hunt is currently a member of the Womble Carlyle Sandridge & Rice, PLLC law firm in Raleigh. He and his wife, Carolyn, live on their beef cattle farm in eastern North Carolina. They have four children and ten grandchildren.