Knox's served as student body president during a period of growth and change for the university, which included the development of the fraternity and sorority system. The College’s Board of Trustees approved the construction of Fraternity Row that included plans for 12 units that could house a total of 500 students. Additionally, in April 1960, Sigma Kappa organized the first sorority on NC State’s campus. Sigma Kappa still maintains an active chapter at State. Campus also experienced new growth with the opening of the "ultra modern" Student Service Center in January 1960. The 21,000 square foot building housed the Student Supply Store and a snack-bar. In 2011, renovations to the Talley Student Center resulted in the demolition of the fifty year old building, which was by then serving as the NC State Bookstore.

In addition to his involvement in Student Government, Knox was active in many campus organizations including Alpha Zeta and Blue Key. In April 1960, Knox was elected permanent president of the 1960 graduating class. Knox graduated from State with a degree in agricultural education and earned a scholarship to Wake Forest University law school where he graduated in the top 10 percent of his class. Knox served two terms in the NC Senate and two terms as the mayor of Charlotte. 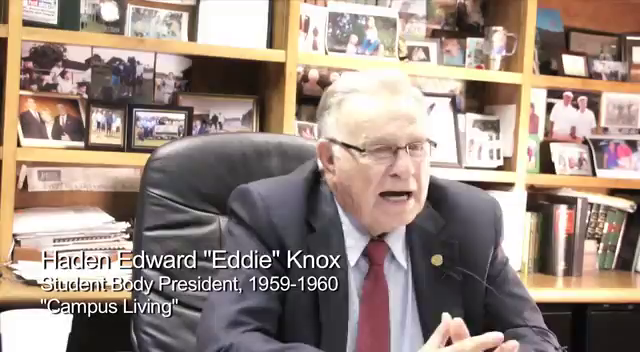 During his term, Knox aided in the creation of an Honor System Commission that focused on strengthening the Honor Code and encouraged students to support the honor system.

As promised during his campaign, Knox sought a reduction in price for date and wife tickets to athletic games and better seating for students and their dates. Date tickets were reduced to $2 per game which Knox claimed allowed students to “date at every event at a very reasonable rate.”

Knox lobbied for the administration to leave classrooms open for night study and as a result several classrooms were unlocked. Additionally, Knox encouraged students receiving loans under the National Defense Education Act of 1958 to oppose the disclaimer affidavits required by the law. Knox called the affidavit “dangerous to the most patriotic citizen” and discriminatory.

Knox served as the mayor of Charlotte from 1979 to 1983. While serving as mayor, Charlotte saw many advances such as the addition of an international terminal at the Charlotte airport and the establishment of a science museum, Discovery Place.

In 1984 Knox ran an unsuccessful campaign for governor of North Carolina. During his campaign, Knox visited NC State to encourage students to register and vote in the election.