Ed Stack, a Rowan County native, was the fourth student body president to serve two terms. While serving his first term, Stack initiated campus improvement programs and developed a creative competition to raise funds to combat the library's budget cuts. Stack received the Technician's endorsement while campaigning for reelection which he successfully won by almost 200 votes. During his second term, Stack fought against the plus-minus grading system and encouraged students and faculty to uphold the University's integrity by preventing cheating. During Stack's presidency, the “Leaders of the Pack” competition replaced Miss NCSU during homecoming in an effort to promote campus diversity and honor outstanding campus leaders. This was the first election of the Leaders of the Pack since 1975. Other notable campus events during this time included the first University-wide fall graduation commencement exercise, which was held at Reynolds Coliseum, and the opening of the Student Center Annex (now Witherspoon Student Center) in January 1991.

Ed Stack graduated from NC State with a Bachelor of Science degree in textile and apparel management in 1992. After spending several years working for Sara Lee's textiles division, he began working for the Wolfpack Club in 1998. 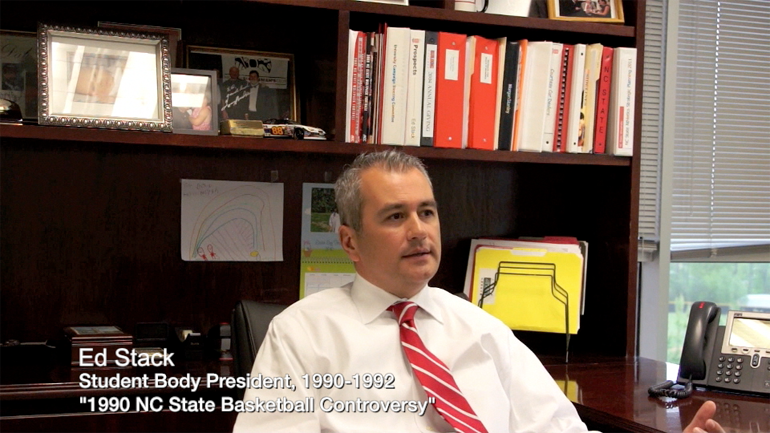 The Executive Branch of Student Government created a “Write for Education” committee to encourage students to write letters to the state legislature in opposition to budget cuts. Student Government collected over 4,000 form letters signed by State students. Stack presented the letters to the NC General Assembly. Additionally, the Executive Branch teamed up with the Physical Plant to sponsor an on-campus beautification project. The project focused on planting trees and plants to control soil erosion.

During Stack's first term, the D.H. Hill Library addition opened amidst a budget controversy. NC State Senior Rob Tuttle organized a sit-in at the library to oppose state budget cuts that affected the library’s hours of operation. Approximately 600 students participated in the sit-in, including Stack. In response to the budget cuts, Stack challenged UNC Chapel Hill’s student body president to a fundraising contest to create an endowment for each school’s library. The losing school’s president had to wear the winning school’s colors at the UNC-NC State basketball game. Stack stated, “Even though State and Carolina are big rivals, we can come together on such an important issue and send a strong message to the state legislature.” State won, collecting over $6,000.

The Faculty Senate proposed reinstating the plus-minus grading system. Stack represented student views by opposing the system. He stated the plus-minus scale could potentially lower students’ GPAs. Stack encouraged student groups to unify against the system at the President’s Roundtable meeting in October 1991. State later adopted the system in 1993.

Stack studied the possibility of voting by telephone for Student Government elections through the TRACS system. He believed implementing telephone voting would increase voter turnout.

Stack presented Governor James Martin with an NC State t-shirt prior to the Wolfpack's match-up against ECU at the Peach Bowl in Atlanta, GA.

Student complaints prompted Stack to consider changes to the structure of Dead Week. Stack worked with the Student Senate to clarify the Dead Week policy and to identify possible exceptions.

Ed Stack is currently the associate executive director of the Wolfpack Club where he is responsible for day to day operations. He also oversees the Real Estate Program, the Courtesy Car Program and is responsible for the College Inn Student Apartments. Stack and his wife, Elizabeth, live in Raleigh with their two children.