Edward Tolson, a Tarboro, NC native, was active in a variety of campus organizations including the agronomy club, the Order of Thirty and Three, and the freshman orientation program. Tolson received awards including first place at the National Speech Contest at the American Society of Agronomy, first place at the Farm Bureau Talk Meet, and the Outstanding Senior award. Tolson’s presidential platform focused on strengthening the Student Government judicial system including the Honor Code and the Campus Code. Tolson strove to develop student-faculty relationships, improve new student orientation, and promote campus beautification. During his presidency, Tolson was married to Betsy Faye Cobb. 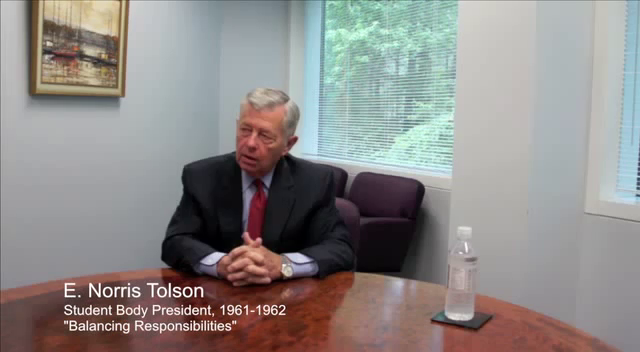 Tolson campaigned for student, parent, and faculty support for the 1961 bond referendum. Although the bond failed to pass, Tolson was successful in raising awareness of the bonds and their potential benefits to NC State.

Student Government petitioned the College to move Christmas break from December 19 to December 16 to correspond with the break of other local colleges. Tolson met with Chancellor Caldwell to discuss the petition, however the petition was denied.

In 1962 the Faculty Senate proposed the elimination of the senior exemption policy, which exempted students from exams in classes where they held at least a 'B' average. Tolson unsuccessfully campaigned against the Senate's proposal. In response to the elimination of senior exemption, Tolson stated, "Student Government put on an extensive drive to have the views of the students expressed to the Faculty Senate. It is quite disappointing that the Senate chose not to give the students a chance to express their opinions."

Tolson is currently the president and CEO of the North Carolina Biotechnology Center, a position he has held since 2007. Additionally, he serves as the chairman of the board of the Biofuels Center of North Carolina. Tolson continues to serve NCSU through his membership on the Board of Trustees. In 2009, Tolson was awarded the Watauga Medal.

Before serving as the Biotechnology Center’s CEO, Governor Mike Easley appointed Tolson secretary of revenue. He has also held positions as the North Carolina secretary of commerce and as secretary of transportation where he reorganized both departments.

About NC State: NCSU Board of Trustees. Accessed 1 September 2010.