Dwuan June, a Gastonia, North Carolina native, was an active member of the Technician staff during his time at NC State. Prior to serving as editor-in-chief of the paper in 1989-1990, June served as managing editor, news editor, and a staff writer. While serving as managing editor of Technician, June maintained an opinion column, “Like it is,” which served as a platform for June to express his opinions on various aspects of student life, including Greek organizations and athletics. June was elected to serve as editor-in-chief of Technician in March 1989, making him the first African American student to hold that position. 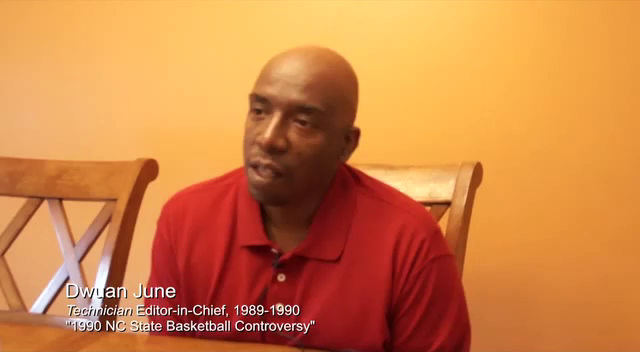 On November 13, 1989, Technician unveiled a new design. June and staff updated the title flag and introduced skyboxes. According to June, “The redesign of the flag and the addition of skyboxes is an example of Technician’s continuing effort to serve our readers.”

During June’s tenure as editor-in-chief, the Technician coved many stories related to the 1989-1990 Jim Valvano basketball scandal. On March 2, 1990, the Technician declared the NCSU basketball program should be shut down, a controversial move for the newspaper.

Dwuan June currently works as a designer at The Washington Post. He previously served as the layout editor of The Charlotte Observer.