Brian Nixon won the spring 1989 Student Government presidential election with over 69 percent of votes, making him the second African American student to serve in the position. While campaigning for the presidency he stated, "I want to be a leader with 3-D vision: dedication, desire, and determination." As president, Nixon implemented programs that encouraged students to practice ethical behavior and allowed students to meet with campus leaders in informal settings. He accomplished many successful programs in spite of the personal racial threats he received as president. The violence escalated in February 1990 when Nixon was attacked in the early morning while walking to his residence hall. He resigned as president in March 1990, one month prior to the end of his term. He cited personal reasons for his resignation and stated, "the pain and pressure has finally taken its toll physically, mentally, emotionally, and especially academically." Nixon graduated from NC State in 1990 with dual degrees in economics and business management. 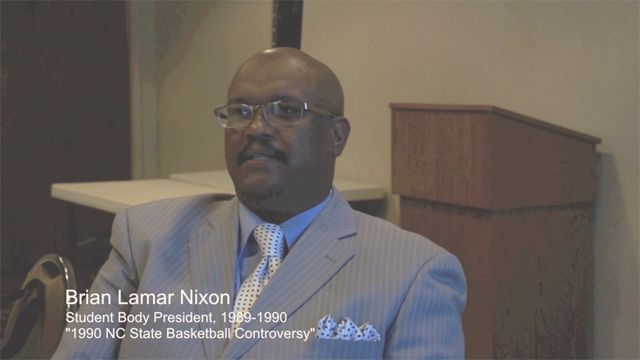 Nixon’s other programs included “A Night with Student Government.” This program allowed students to talk to faculty members and Student Government representatives in an informal setting in the dining hall each Tuesday.

Additionally, Nixon initiated a campaign to improve the moral and ethical behavior of students and faculty. He also issued a memorandum that defined the Code of Ethics for the Executive Branch of Student Government. The Code stated that members should “uphold the highest standards of virtue and ethical behavior.”

After NC State, Brian Nixon worked for DuPont Industries and Invista. He became a minister in 1995. He served as pastor of Holy Trinity Baptist Church in Virginia and later at Transforming Faith Baptist Church in Chattanooga, Tennessee. He and his wife, Kimberly, had three children. Brian Nixon passed away on 12 August 2018.