Adam Compton’s first foray into student leadership on campus was his sophomore year, when he represented the engineering department in the Student Senate. The next year, he won the position of Student Body Treasurer with 56.8% of the votes. Though he lost his bid for Student Body President the following year, he served as Senior Class president. In addition to his positions in Student Government, Compton served as president of Delta Upsilon, Homecoming Director, and an alumni ambassador. After leaving office, Compton served as a Consultant for president Jay Dawkins. In 2010, Compton was one of three national college students named Outstanding Student Leader by the Council for the Advancement and Support of Education (CASE). 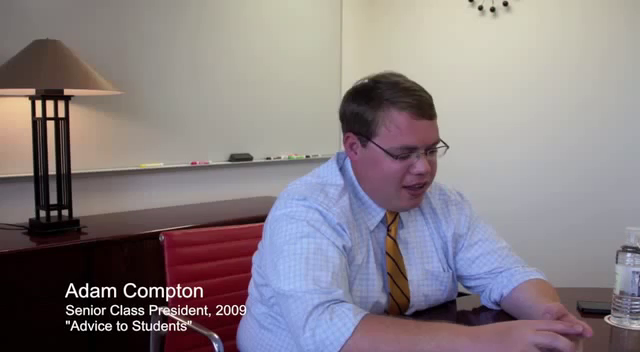 In the interest of Student Government transparency and efficiency, Compton advocated for a biennial audit.

After receiving several complaints about the length of student campaigns, Compton introduced a bill limiting Student Government campaigning to two weeks before the election, with only one day of voting. Compton felt that this would not only resolve student complaints, but also allow all candidates to concentrate on schoolwork before campaigning.

One of Compton’s biggest accomplishments was reformation of the appropriations process. Beginning work on the issue immediately after entering office, Compton and the appropriations committee shortened the process for student organizations by a month. Compton described this victory as “one of the main successes this year.”

Compton and other members of the Student Government created a virtual help desk online for student organizations. In addition, Compton purchased a laminator and printer for use by campus student groups.

Compton is currently a Development Specialist at NC State. He also is co-owner and co-operator of ACW Enterprises, LLC.