This interview took place at the D. H. Hill Library on the campus of North Carolina State University. 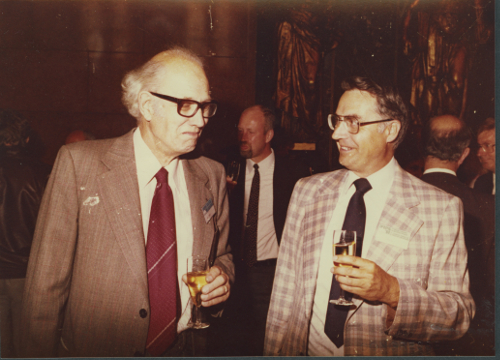 Robert G. Sargent is a Professor Emeritus of Syracuse University. He earned a BSE in Electrical Engineering in 1959, a MS in Industrial Administration in 1963, and a Ph.D. in Industrial Engineering in 1966, all from the University of Michigan. At Syracuse University, Sargent held faculty appointments in different departments and interdisciplinary programs in the L. C. Smith College of Engineering and Computer Science and was also the Director of the Simulation Research Group. He initiated the reestablishment of the Winter Simulation Conference (WSC) in 1976, wrote the WSC Bylaws, was the General Chair of the 1977 WSC, and served as a member (1974-1984) and as Chair (1979-1981) of the WSC Board of Directors. Sargent was the Founding President of the WSC Foundation in 2004, initiated the establishment of the Simulation Archive in 1998, and has been significantly involved in the development of the Simulation Archive including starting its endowment in 2007 and serving as the initial chair (2007-2011) of its Advisory Committee that he initiated.

Sargent is a fellow of the Institute for Operations Research and the Management Sciences (INFORMS) and the American Association for the Advancement of Science (AAAS). He served as Chair (1978-1980) of The Institute of Management Sciences (TIMS) College on Simulation and Gaming (now the INFORMS Simulation Society). Sargent received the TIMS College on Simulation’s Distinguished Service Award in 1988, the INFORMS College on Simulation's Lifetime Professional Achievement Award in 2002, theWSC Board of Directors’ Award in 2010, the Association for Computing Machinery (ACM) Special Interest Group on Simulation and Modeling (SIGSIM) Distinguished Contributions Award in 2012, and service awards in 1985 from the ACM and the Institute of Industrial Engineers (IIE). He also received a 40th anniversary Landmark Paper Award from the WSC in 2007 for his WSC tutorials on verification and validation of simulation models. Throughout his career, Sargent has been especially known for his professional service contributions and his research contributions to the methodology of simulation, which includes modeling, computational speedup, statistical output analysis, verification and validation, and visual interactive simulation systems.